In the late 1980s, an industrial waterborne coatings company, Blue River Coatings, entered the experimental aviation market with a revolutionary new covering system that was completely water based/waterborne.  This system was entirely unique from anything else in the industry in that it used no hazardous solvents.  It was not hazardous to the health of the people using it or to the environment, and it offered the additional advantages of being non-flammable and non-hazardous to ship.

Blue River Coatings offered the entire system including the waterborne, polyurethane-type topcoat.  Quite a few airplanes were covered in that system, but in a few years, it became evident that the topcoat was not flexible enough, and it began cracking badly.  Soon, Blue River exited the aviation market completely.  Many of those aircraft that were covered in the Blue River system that were painted with a conventional topcoat are still flying today.

A Waterborne Revolution was Inspired

While the topcoat portion of the Blue River Coatings system failed, they had none-the-less inspired a waterborne revolution in the aviation covering industry.  Soon a small company, Aircraft Finishing Systems (AFS), decided to pursue the waterborne idea.  Learning from the successes and failures of the Blue River system, they went on to refine the system and develop an entirely new catalyzed polyurethane topcoat. While AFS produced the entire system and were gaining market share, they were not able to complete the STC process.  However, many certified aircraft were covered with AFS by way of field approval.  Many of those aircraft are still flying today and looking great!

During that time in the early 1990s, two of the dealers for AFS that truly realized the potential of this technology and were actively promoting it were Dan and Doug Stewart.  They became very proficient with the system and covered many airplanes and helped many other people to cover their own.

As time went on, supply and availability issues became a significant issue for AFS.  Dan and Doug Stewart were given the opportunity to purchase the business in 2005 and became the new owners.  At that time the name changed to Stewart Systems.  Immediately, Dan and Doug began to improve the overall quality and consistency of the products and correct the supply issues.

They also began the enormous task of obtaining an STC to cover certified aircraft with Stewart Systems.  By late 2006, after rigorous testing and mountains of paperwork, Stewart Systems was granted an STC.  Soon, nearly every fabric aircraft imaginable was included on the Approved Model List.  Along with the STC, it was included that Stewart Systems, because it relied on a mechanical bond rather than a chemical bond, could be used to repair any other certified fabric system!  Now there was a system that was certified to repair not only current fabric systems, but also all of the obsolete fabric systems still flying, such as cotton, Razorback, and may others.

Another innovation Dan and Doug completed was and exhaustive video series covering every aspect of covering and painting an aircraft with Stewart Systems.  This video series is available, free online and also on DVD.  It remains the only one like it in the industry and continues to get rave reviews!

Once the Stewart brothers took ownership of the company, they, along with Dan’s wife Marjie, began heavily promoting the system.  In the first few years, Stewart Systems experienced explosive growth as more and more people began to understand the benefits of the waterborne system.

All along the way, minor improvements in manufacturing and application techniques continued to improve the system.  In 2013, Stewart Systems improved the EkoPoly topcoat, renaming it EkoPoly Premium, which greatly improved the application process by extending the pot life from 1 hour to 3-5 hours. Also improved were the flow characteristics, overall durability and the shelf life.  In the same year, EkoCrylic was introduced.  EkoCrylic is a waterborne topcoat that is similar to EkoPoly Premium but is designed specifically for metal and composite aircraft.  Stewart Systems was no longer just for fabric!

As Stewart Systems continued to grow, it became a bit overwhelming for the Stewarts as they approached retirement years.  In 2015 the opportunity was presented to one of the Stewart Systems dealers in Ohio, Andy Humphrey of Heavenbound Aviation, to purchase the company.  In late 2015 the transaction was completed and Stewart Systems entered new ownership.  Although the entire manufacturing facility was moved to Ohio, the name, the products and the philosophy remained the same. 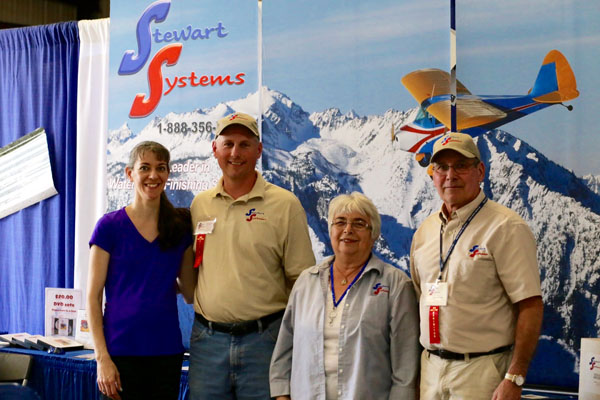 In the coming years, Andy hopes to continue to forge ahead with the waterborne revolution!  Our goal is not only to keep the old airplanes flying as well as getting new ones in the air, but more importantly, to do the same for the pilots, mechanics and home builders.  Covering aircraft should not be a dangerous operation; it should be a fun project for the whole family.  Andy and his wife, Amy, have three children that they home school.  Josie, the oldest at 14, is already actively involved in various tasks at our production facility.

Vision for the Future…

Our vision for the future is to continue to strive to make our products even better as waterborne technology advances.  Furthermore, we are continuing to improve application techniques and instructional information to make covering easier and to eliminate human error.  In 2017 we released Revision 3 of our Procedures Manual to clarify several things that were generating questions or mistakes.

Our marketing strategy for the future is based primarily on personal relationships.  Our goal is to get to know as many of our customers as possible and meet them face to face, as well as to support and expand our dealer network.  To accomplish this, we will strive to be at as many shows and gatherings as possible around the nation and around the world.  Also, our intent is to be readily available for phone and email support whenever you need us.

Another avenue for getting to know our customers is through online groups and forums.  If you know of a forum or group that would benefit from our involvement, please let us know.  Please take advantage of the forum on our website as well!  Also, if you know of any gatherings that we would be welcomed at, please invite us!

Another key to our vision going forward is education.   Our goal is to provide as many hands-on workshops as we can, both abbreviated, free workshops at shows as well as in-depth, 3-day workshops around the nation and around the world.  Furthermore, it is our desire to partner with as many aviation schools as we can who will teach students to use our products.  If you are a faculty member at a school with an aviation maintenance program or a youth organization teaching aviation, please contact us to take advantage of discounts that you may be eligible for.

At Stewart Systems we are passionate about partnering with Christ-centered mission organizations who are using aircraft in the mission field around the world. We understand the incredible asset an aircraft can be to a missionary working in remote areas. We offer deep discounts to qualifying mission organizations, and, when possible, we will help to network with other missions organizations and volunteers to help keep these aircraft working hard every day. If you are a missionary utilizing aviation or if you are interested in volunteering to help maintain aircraft in the mission field, please contact us for more information!

At Stewart Systems we are advancing waterborne aerospace technology into the future!